The Searching Dead by Ramsey Campbell 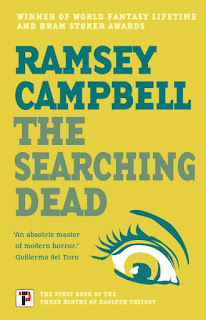 "Dominic Sheldrake has never forgotten his childhood in fifties Liverpool or the talk an old boy of his grammar school gave about the First World War. When his history teacher took the class on a field trip to France it promised to be an adventure, not the first of a series of glimpses of what lay in wait for the world. Soon Dominic would learn that a neighbour was involved in practices far older and darker than spiritualism, and stumble on a secret journal that hinted at the occult nature of the universe. How could he and his friends Roberta and Jim stop what was growing under a church in the midst of the results of the blitz? Dominic used to write tales of their exploits, but what they face now could reduce any adult to less than a child..."

I'll be honest, I've always thought of  Ramsey Campbell as one of the best writers of this kind of horror fiction and this didn't disappoint at all. Although the start was a little slow the knowing that RC was going to be ramping up the scares in his own good time kept me turning the pages.

As for the characters, Dominic and his friends were enjoyable enough but the real interesting one was Mr Noble. It's the knowing something is off with him and trying to guess where the author is going with him. Very reminiscent of Stephen King when he was at his best where the horrors start small but quickly head towards being potentially cataclysmic.

Set in 1950s Liverpool Campbell really catches the era with this, his latest horror novel (1st of a trilogy). The shadow of WW2 still hangs over the city with it's bomb sites and the feeling of the wartime community spirit still strong.

This review is from the Netgalley version of the book, the physical version only arrived this morning 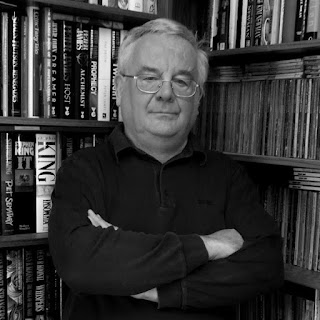 Thanks to Flame Tree Press for providing the copy, Anne Cater for inviting me onto the tour and please have a look at the posts by the other bloggers on the tour