Rise To Me by Shani Stuthers - a review

This is the second in the Psychic Surveys series which began with The Haunting of Highdown Hall last year. Based in Lewes, East Sussex  Psychic Surveys is a business that, among other things,  helps spirits grounded in this world to move 'into the light'.

Rise To Me is a darker book than Highdown Hall was....much darker. Things that were hinted at in the first book are brought to the fore and affect the dynamic of the team when they need to be at their strongest. Things really kick off when Ruby, the owner of Psychic Surveys, goes with her boyfriend Cash to try and help his brothers friend who seems to be battling several demons. Whatever is haunting him seems to latch onto Ruby and so starts a battle for her soul and her sanity that will take all that the Psychic Surveys team have and even that may not be enough.

The story touches on the story of Aleister Crowley, which may give you an idea as to how 'dark' it is, certainly not a 'fluffy' ghost story. There are moments that may well keep you up at night (and not just for the scary bits - it really is a book that will keep you turning the pages just to see how it will all turn out). The ending was satisfying, to say the least, everything tied up nicely and an earlier 'side mystery' was put to bed.

I had been waiting for this book ever since finishing Highdown Hall and was not disappointed (apart from the fact that I am now waiting for the next in the series, which can't come soon enough
Posted by Ebookwyrm at 14:04 1 comment:

This April, 2015 sees the release of Scott Perkins' novel, Howard Carter Saves The World. It's got Giant Robots, It's got Time Travel, Its got Mad Scientists and THE FATE OF THE WORLD RESTING IN THE HANDS OF ONE BOY AND HIS FRIENDS!!!!

Really, what more could you ask for.

And as a special treat today you can have a sneak peek at the cover ;-) 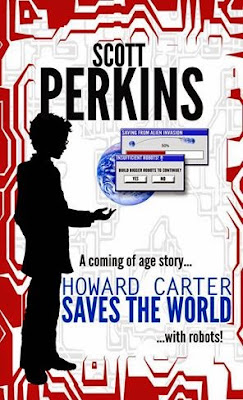 Posted by Ebookwyrm at 07:37 No comments:

Today is a very sad day for me and millions of readers around the world. Within the last hour or so it has been announced that Sir Terry Pratchett has lost his fight against poor health (Alzheimers) and passed on from our world. I didn't plan on writing this blog post but found myself here by chance, so......here goes.....

My first encounter with Terry Pratchett and Discworld was one of those happy coincidences - I was in a book club and forgot to place an order so they sent me Book of the Month (you had to buy something!!). That book happened to be Mort. I was taken in straight away by the artwork on the cover (Josh Kirby?) so dipped in and have never looked back.. That was the mid eighties I think so I guess I've been visiting Discworld for nigh on 25-30 years.

Over the years Terry P has written a vast number of books covering several genre types, not only on Discworld but I guess those are the ones he will be most remembered for. His wit and intelligence shone from the page, sometimes making you smirk, sometimes a wry grin or a chuckle and at times making you laugh till your sides hurt.*

There have been many, many great authors over the years and I would like to think that Terry Pratchett will be ranked up with the best of them. A great man who I had the good fortune to meet once at a book signing (Hogfather) and the queue was immense but he still took as long as was needed to sign everyone's books.

I may have more to add in the future but for now I feel too numb to think. All that is left to say is "Sleep well Sir, and rest in peace......oh, and thank you for allowing us to share your world"

The Iron Ghost by Jen Williams (a review)

Last year Jen Williams broke onto the scene with her first novel, The Copper Promise, (my book of the year 2014).

2015 sees the arrival of a new story in the series, The Iron Ghost, a huge doorstopper of a book - and I have been eagerly waiting ever since I was aware of it's release date. We are re-united with the heroes of The Copper Promise - Wydrin of Crosshaven (aka The Copper Cat), Sir Sebastian and Lord Aaron Frith. After their escapades and heroics in their previous adventures they are in demand and this adventure finds them heading to the city of Skaldshollow. It should be an easy job but, as you would expect, nothing is ever simple. The Narhl have stolen The Heartstone from Skaldshollow, and they want it back as it is central to all life in the city, so, go to the Narhl, find and return the stone, job done, simple.

But, as I mentioned before, nothing here is ever simple. There are much darker things at hand and at the root of it all is the ancient mage Joah Demonsworn who wants to return to the world. He wants Aaron by his side (well, he wants his magic and his knowledge).

There is much here that was present in The Copper Promise - great characterisation, great world building, great banter and story telling that really knocks it out of the park. This time though it is all taken up a notch. When I reviewed The Copper Promise I likened it to Dungeons and Dragons for a new generation. Well, if TCP was Dungeons and Dragons then The Iron Ghost is the Expansion Pack - new areas, new characters, new creatures, new spells etc. But this isn't just any expansion pack, this is the one you would queue outside the shop all night to get your hands on - it really is that good.

In Jen Williams we have someone with a gift for storytelling that not many have, and that is the ability to not just tell a tale but to actually take you inside the story, to let you stand with their characters in their darkest moments and good times too, to let you live the story, not just read it. I will be the first to admit it took me a bit longer than usual to finish this book but there is a simple reason for that - I was dragging it out because I didn't want it to end. I will be revisiting this series on a regular basis and can assure you that they will have pride of place on my bookshelves.

There has been talk before of the lack of prominence of female authors in the genre - well here is one who deserves to be top of the pile. Take a bow Jen Williams, you've done a grand job.
Posted by Ebookwyrm at 00:04 No comments:

Angel of Death by Ben Cheetham - a review

An enjoyable (if that's the right word*) thriller. In Middlesbrough a heroin addicted prostitute shoots a man dead, in Sheffield a man shoots his family and burns down the house - two different crimes but what links them?

As crime novels go this was at the good end of the scale. It had a lot of the 'usual' - cop at the back end of his career, doesn't get on with his superior etc but there was also enough freshness to keep things interesting. The 'bad guys' were truly vile and the character of Angel was written well, making her 'kind of likeable' for a killer.

I think what impressed me most was the tying up of loose ends at the end. Without giving too much away most got what they deserved (apart from one, which I wasn't expecting) and the final, final twist, I will admit, caught me out. Jim Monahan is certainly an old time copper with a few tricks up his sleeve.

I had a few niggles with the story but nothing that I would bother you with, just a Sheffield lad reading a book set in Sheffield.

This is the second in the Steel City Thrillers series. There is a third, Justice For The Damned, due out this week. I intend reviewing each one on this site at some point.


* I wasn't sure if you could really describe a book as dark, gritty and at times disturbing as Angel of Death as 'enjoyable' but I enjoyed the read so I have (My Blog, My Rules ;-D)
Posted by Ebookwyrm at 08:35 No comments: