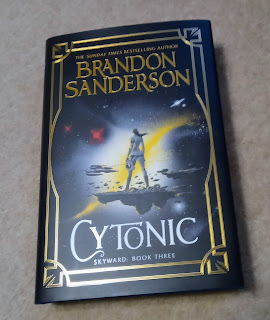 Welcome to my post on the Blogtour for Cytonic, the third novel in Brandon Sanderson's Skyward series

Spensa's life as a Defiant Defense Force pilot has been far from ordinary.

She proved herself one of the best starfighters in the human enclave of Detritus and she saved her people from extermination at the hands of the Krell - the enigmatic alien species that has been holding them captive for decades. What's more, she travelled light-years from home as a spy to infiltrate the Superiority, where she learned of the galaxy beyond her small, desolate planet home. Now, the Superiority - the governing galactic alliance bent on dominating all human life - has started a galaxy-wide war. And Spensa has seen the weapons they plan to use to end it: the Delvers. Ancient, mysterious alien forces that can wipe out entire planetary systems in an instant.

Spensa knows that no matter how many pilots the DDF has, there is no defeating this predator.

Except that Spensa is Cytonic. She faced down a Delver and saw something eerily familiar about it. And maybe, if she's able to figure out what she is, she could be more than just another pilot in this unfolding war. She could save the galaxy. The only way she can discover what she really is, though, is to leave behind all she knows and enter the Nowhere. A place from which few ever return.

To have courage means facing fear. And this mission is terrifying

I only recieved my review copy a couple of days ago so this is not a full review - that will follow in good time (but hey, it's Sanderson, I'm sure it won't be too long. The guy is a byword for books that keep me reading for 'just a few more pages' and find me still at it long after everyone else is asleep). This is just my early thoughts...

Cytonic starts out with Spensa entering The Nowhere - which is probably the best way to describe it. The Nowhere is almost (in my eyes at least) another dimension, it's the place things pass through when Hyperjumping through space and the place where Spensa may just find the means to save the Galaxy.

Of course Spensa is not alone, she's accompanied by M-bot as always (somehow I can't help being reminded of a certain Hanson whenever it pops up) and also a new character - Chet Starfinder, Interdimensional Galactic Explorer. I mean, the guy enters the story coming to Spensa's rescue riding a dinosaur - yup, you read that right...

That's how you make an entrance!

Cytonic is, so far, everything I love about Sci-fi, it's action packed, lots of fun and you don't need 4 science degrees to understand what's going on. I've enjoyed this series since it began (with the Top Gun in space like Skyward) and it just keeps getting better. Sanderson does characters and world-building very well indeed and is an excellent teller of tales whether Fantasy or Sci-fi, Adult aimed stories or YA and any new title from him goes straight towards the top of Mt. TBR

So, more on this when I get to the end but for now, suffice to say, I'm thoroughly enjoying it.

I'd usually stick an author photo here but, just for a change I thought I'd go with a photo from when I met the man himself at Forbidden Planet, London several years ago. 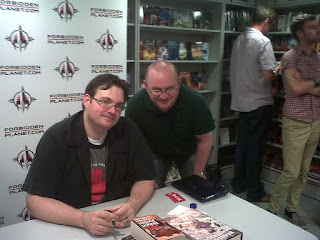 Thanks to Will O'Mullane for inviting me onto the tour and Gollancz for providing the early review copy. Please take a look at the reviews by other bloggers on the tour 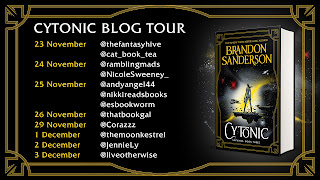 Posted by Ebookwyrm at 07:13 No comments: