What Will Burn by James Oswald 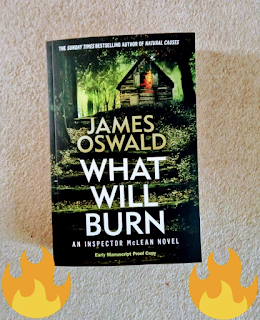 What Will Burn is the latest (book 11) in the Edinburgh based Inspector McLean series. I started reading these last March when Lockdown kicked in and it's fair to say they were a big part of what got me through it. When I was asked if I would like to review an early copy of the new one it was a bit of a no-brainer really. So here we are. . .

WWB begins with an old woman burned to death in an old Game Keeper's cottage in the woods. As McLean is suspended after his last case it is left to DC Janie Harrison to investigate but the crime scene is already a week old.

By the time McLean is back on the job, busted back down to Di there is already plenty of other stuff going on, not least of which is a women's protest at a conference for men's rights in the city being run by the repugnant lawyer Tommy Fielding.

As is often the case in this series there are supernatural overtones and with links to historical witchcraft cases and more weird and mysterious deaths that soon comes to the forefront.

What I like about this series is that McLean is not your regular 'troubled maverick' copper. Yes, he's got issues with some of the staff but then, who hasn't. He does seem happier having been demoted and if I'm being honest I'm kinda glad he has been too - it's more chance for him to get into the nuts and bolts of the case without having to make excuses to do so.

As always there are the occasional characters that pop up (I'm looking at you Madame Rose, psychic and cat collector) and there is a crossover from Oswald's other crime series as well (I guess paying back the favour from when Madame Rose popped up in that one). McLean's partner Emma is away with work which probably gives them both a bit of much needed space but he has Mrs McCutcheon's Cat for company (one of my favourite characters) 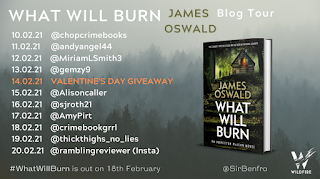 Thanks to Antonia Whitton at Headline books for inviting me onto the tour and providing the review copy.