Whisper Down The Lane by Clay Mcleod Chapman 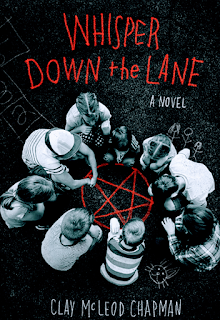 OK, I'll be straight up from the start, although I grew up in the 80s I have no recollection of the 'Satanic Panic' but I'm guessing that could be because it was an American thing and I was in the UK. Anyhow, I looked into it online and, being honest, it was more than a little crazy. Anyhoo, onto the book itself.

The main premise of this story is 'what happens when you tell a white lie and things spiral out of control'. There are two strings to the story, one featuring Sean, a five year old in the 80s and then 30 years later we meet Sean again, now called Richard.

Sean is the boy who told the white lie after a letter from school states that his favourite teacher is under investigation. The 'white lie', as I said before, spirals way out of control but who is actually at fault? Is it Sean, is it his mother or is it the media. I kind of understood the reasoning behind it from the family point of view but certainly can't agree with it.

And so we move on 30 years and Sean, now going by the name Richard, is settling down to married life and a job as a school art teacher. He's doing his best to forget his past. All is going well until events conspire to show someone knows what happened and who Richard really is . . . and it's time for payback.

Being honest I found Sean quite annoying and didn't particularly engage with his strand but Richard was a totally the opposite. This was really suspenseful and kept me guessing as to who was behind it all. I changed my mind several times.

The author did a good job of keeping the two different eras feeling different, which helped a lot with the flow and it intrigued me enough to look into the Satanic Panic (although not for too long - those were crazy times)

On the downside I didn't feel comfortable with the animal cruelty. This was not a huge part of the story but this is a thing that always puts me about when reading. I see how it was relative to the story and fits with the horror themes but that doesn't mean I have to like it.

A good read but should come with a trigger warning