The Whispers by Heidi Perks 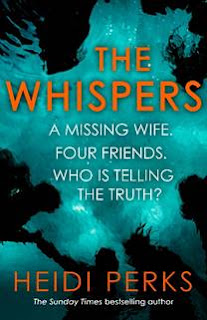 A missing wife. Four friends. Who is telling the truth?

Anna Robinson hasn’t been seen since she went on a night out with her four closest friends.

She has a loving husband, a son she adores, a perfect life… surely she wouldn’t abandon them. And if not, then something terrible must have happened.

It’s not long before the rumours start at the school gates where this group of friends all met. What exactly happened on that mum’s night out?

Anna’s oldest friend Grace is beside herself with worry – desperately searching for answers and certain that someone is hiding the truth.

With each day that passes, Anna’s life is under increasing threat. And as the pressure mounts, it won’t be long before something cracks…

Grace and Anna were friends from age 5 to the time Grace left for Australia age 17. Now, years later Grace is back and hopes to pick up their friendship where they left off but Anna has her perfect family now and a new set of friends. All things come to a head when, after a night out Anna disappears. As the search for her goes on so the twists begin. What is the secret from Grace and Anna's childhood? Who are Anna's new friends? Who is telling the truth?

Told from several conflicting points of view this, Perks' 4th novel kept me guessing and changing my mind as to just what was what for most of my read (and yeah, it's a cliché but it kept me reading nights later than I intended).

The way the tension was built up was very well done and I felt real dislike for several of the 'Schoolgate Mummy's' (but in a good way, if that makes sense - it helps to have characters you love to hate, the ones only too happy to say what others only think)

The only downside was that it took a while to 'get going', a bit of a slow burn at first. 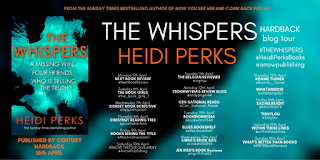