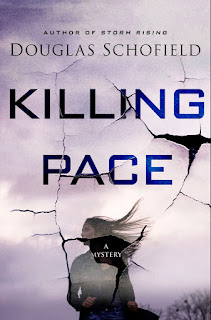 In Big Cypress National Reserve, Florida Lisa Green is in a road traffic 'accident' that leaves her, battered, broken and suffering with amnesia. As she and her fiancee lay up in a cabin while she recovers Lisa starts to feel something here isn't right.

As her memories are gradually returned she regains training and skills she was unaware of and, as well as realising she is actually a prisoner of the man she thought was her fiancee, she also finds she is really Laura Pace, U.S. Border Protection officer - and a very good one at that.

At this point the story flashes back to Sicily and how she eventually ended up in the here and now.

As Laura (as she is now) escapes from the hut that has been her prison she must assemble a rather dodgy 'team' in the hopes of clearing her name and serving justice.

It's no big secret that I am a massive fan of the Jason Bourne films (not the original books though, never those) so the idea of what could possibly be seen as a female Bourne character left me in two minds. It could be a cheap rip off of an original idea or it could be marvellous. Thankfully Killing Pace fell firmly into the second camp. LP is a formidable creation with some very good skill sets that will hopefully be back for future adventures (and hey, maybe a big screen outing too - I feel this would translate well as a movie)

The only downside (and it's only minor) was that the flashbacks threw me slightly out of the story at times, but as the Pace picked up (ha, ha, see what I did there😂) I found myself tearing through this book to get to the resolution.

Laura Pace stands on her own two feet as a series lead character and I am certainly looking forward to her further adventures.