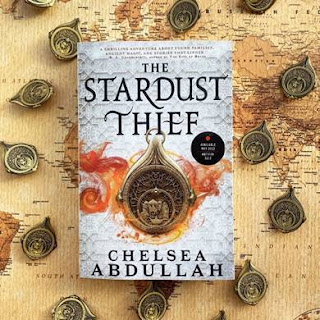 Synopsis
Inspired by stories from One Thousand and One Nights, The Stardust Thief weaves the gripping tale of a legendary smuggler, a cowardly prince and a dangerous quest across the desert to find a magical lamp.Neither here nor there, but long ago...Loulie al-Nazari is the Midnight Merchant: a criminal who, with the help of her jinn bodyguard, hunts and sells illegal magic. When she saves the life of a cowardly prince, she draws the attention of his powerful father, the sultan, who blackmails her into finding an ancient lamp.With no choice but to obey or be executed, Loulie journeys with the sultan's oldest son to find the artefact. Aided by her bodyguard, who has secrets of his own, they must survive ghoul attacks, outwit a vengeful jinn queen and confront a malicious killer from Loulie's past. And, in a world where story is reality and illusion is truth, Loulie will discover that everything - her enemy, her magic, even her own past - is not what it seems, and she must decide who she will become in this new reality.
My Thoughts
Well, where do I begin? I had my eye on this book as soon as I heard about it. I grew up loving stories like this with desert settings, genies (or djiin when I got older I guess). Ali Baba and the Forty Thieves, Aladdin and his magic lamp. The Stardust Thief took me back to the Lands of Sand and when it was over I really didn't want to leave.
Loulie (The Midnight Merchant) is sent to find a magic lamp with the Sultan's older son but he doesn't want to go . . . and he has a plan to get out of the quest! And that my friends is where the magic really kicks in. The desert is a dangerous place and Chelsea Abdullah does a great job of making it almost a character in it's own right. The whole place feels alive, the scents and sounds coming straight off the page.
The characters all seem to have secrets (don't they always) and you'll just have to see for yourselves how that turns out (Spoilers!!)
I could go on about what a fantastic story this is but the best thing I can do is tell you go get this book now. You can thank me later 😉 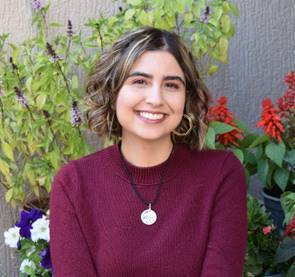 The Stardust Thief is out now in Hardback (and here's my local Waterstones copies) from Orbit. 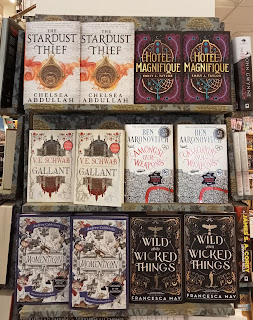 Thanks to Orbit for providing me with a review copy - the fact that they did has no influence on my opinions on it though.
Posted by Ebookwyrm at 13:24