Cover Reveal for Dan Godfrey's The Calculations of Rational Men

15th August 2022 sees the release of Dan Godfrey's second self published novel (he's also had three rather excellent novels traditionally published ) and today I have the pleasure of revealing the cover for you to feast your eyes on.
First up though, here's the blurb from the back page to whet your appetite...
'The United Kingdom and her allies have been targeted in a widespread nuclear attack.
December, 1962. Just months after the Cuban Missile Crisis, the five hundred men of HMP Queen’s Bench have found themselves in the midst of a new thermonuclear nightmare.
We do not know the status of our towns and cities. We shall not know their fate for several days.
Prisoners, wardens and soldiers must now work together to forge a new future, even if some inside the shelter can only think of how to turn the situation to their personal advantage.
Radioactive fallout will present the greatest risk to health. Medical staff and supplies are available.
Caught in the very centre of the power struggles is Dr Joseph Marr. Just days into serving a life sentence for murder, he is given the responsibility for the health of all the men of HMP Queen’s Bench. But the question for him now is: how does he ensure those in the shelter survive?'
All sounds very promising eh 😉
Well, you've waited long enough I guess, so now it's time. Here is the cover for The Calculations of Rational Men and a bit about the design from Dan himself. 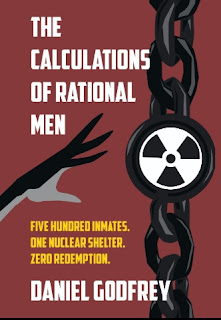 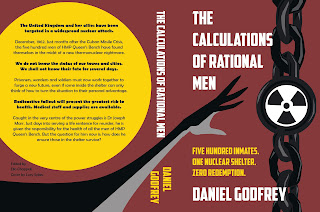 “I’ve had three books traditionally published, and one other self-published novel – but this is the first one I’ve had any great input into from a design perspective. We looked at a number of cold war and nuclear posters and material from the 1960s from the UK, US and Soviet Union to give us inspiration. After playing around with a few options around the key themes of radiation, prisoners and the nuclear threat, we came up with the final cover. I’m hoping this conveys clearly what the book is about!”
So, there we have it. I'm certainly looking forward to The Calculations of Rational Men and I hope this has whetted your appetite for it too.
Thanks to Dan for asking me to do this cover reveal at the BlogCave (it's my first one!!)
Posted by Ebookwyrm at 13:23