Girl In Snow by Danya Kukafka 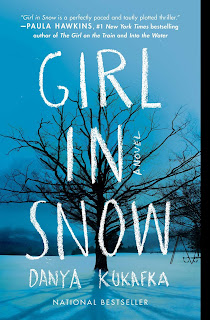 Wow! What a surprise this was. Obviously I expected to enjoy it, that's why I opted to review it, but just how good it was was a revelation.

The story revolves around 3 main characters, told from their own perspectives and really, although it is about a murder, it is much more about the lives of the 3 and the small Colorado town they live in.

Cameron is a troubled teen who takes to sneaking out at night and staring through windows at people's lives.

Jade doesn't 'conform' to the teen girl image and is a bit of an outsider but also an observer of people in her own way.

Russ is a police officer, who used to work with Cameron's dad, who has secrets of his own.

When a local girl is found murdered most fingers seem to point at Cameron, who was quite obsessed with her, although Russ also thinks it may be his ex jailbird brother-in-law. To be honest, Cameron looked like the best suspect to me for a large part of the story too.

On the way to catching the killer we learn a lot about the past of all 3 and it is to the author's credit that each had a strong air of authenticity. Throughout the story they all come across as varying shades of 'broken' but by the end they just might all have a chance of some kind of redemption.

A cracking novel, and an author I will certainly be keeping an eye on.

This kept me hooked deep into the night