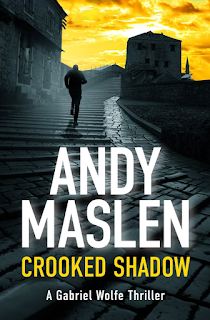 Ex-SAS hero Wolfe wants vengeance for his parents’ deaths. But the killer he’s hunting has one last card to play

Gabriel Wolfe has seen many faces of evil, fought it, and won. On his latest mission, a stone-cold quest for vengeance, he’s flying solo. He's on administrative suspension after a car crash that almost cost a man his life. That means no backup from his boss, no support if things turn nasty, just him, his wits and his resolve to see justice done.And what justice. Tracking down the corrupt cop who ripped Gabriel’s family apart, causing the deaths of his brother and his parents. And separating Gabriel from his sister for almost 40 years: the former triad bodyguard Wei Mei.A former warlord drenched in the blood of innocentsRatko Popović ran a vicious Serbian militia during the Bosnian war. The White Eagles were feared for their ruthless brutality. But when the wind changed and the International Criminal Tribunal for the former Yugoslavia ground into gear, Popović bailed out, leaving his men to their fate. He now runs an organised crime gang called The Golden Bough and is about to become embroiled in Gabriel’s hunt for the bent cop.Gabriel follows a trail that takes him from the deceptive calm of the Suffolk coast all the way back to Hong Kong, where he joins forces with Mei. Then on, in a dizzying chase, to southern Spain and finally deep into Serbia.‘Do I?’Gabriel is also struggling to accept the different life on offer thanks to his girlfriend Eli’s, proposal of marriage.Can he continue to operate as a Department assassin when his wife would give his enemies additional leverage? As he wrestles with the risks and rewards of marriage, an old friend returns to interrogate him.So many deadGabriel and Mei think they have cornered the man they came to kill, but life is never simple for the Wolfe siblings and a disaster ensues, splitting them apart.
With Mei’s life forfeit if he makes a single wrong move, Gabriel must draw deep on his well of courage and mental strength to save his sister. He know what it means to lose the ones he loves and is determined not to fail. But with the odds stacked against him, things are looking bleak for the ex-SAS hero.
The Review
This is the twelfth book in the Gabriel Wolfe series so I guess if you've followed the story so far you kinda know what you are expecting.
If, like me, you are new to Gabriel Wolfe you'll get the idea from the blurb. What we have in Wolfe is a one man War Machine, a guy who can take on anyone, anywhere - your typical action movie hero. And this time he's bringing his sister along to play. Together they make a formidable team, kicking butt in various countries until she is taken and Wolfe has to do whatever he can to get her back. He lost her as a child and he's not going to lose her again.
I'll be honest, it took me a bit of suspension of belief before I really got into this book but once I accepted it for what it was, especially with the OTT fight scenes the pages fair flew by.
I'll be going back to the earlier books pretty soon I think.
Would be an excellent holiday read
Posted by Ebookwyrm at 04:16