The Hangman's Song by James Oswald 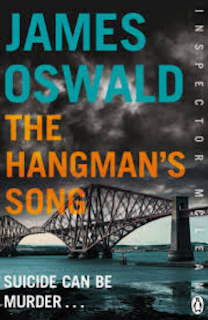 This series just keeps getting better and better. The character cast have all settled into their roles and the story flows really well.

Poor Inspector McLean though. Now seconded to Vice he ends up working two cases for two departments as his colleague ask for help when called to a suicide by hanging that just 'doesn't feel right' while he is trying to sort out a case involving the possible smuggling of sex workers out of the country. And as if that's not bad enough his Nemesis, Dagwood, is temporarily ruling the roost and making McLean's life even more hellish than usual.

At home his girlfriend Emma is still recovering from her ordeal in the last book and that's not going great so more pressure on McLean.

There is a big supernatural bent to this story but I really hope that doesn't put people off as it works really well.

If there is a downside to Hangman for me it's that the treatment of McLean by his Dagwood and his cronies is getting a tad tired. It seems he is called in for a bollocking nearly every day.

How good is this series? I've got through the first three in just over a week (Ok, Lockdown helps but I could have chosen other reads) and am seriously jonesing for the 4th but I'm going to try and hold out, make this last.