Beyond Kidding by Lynda Clark 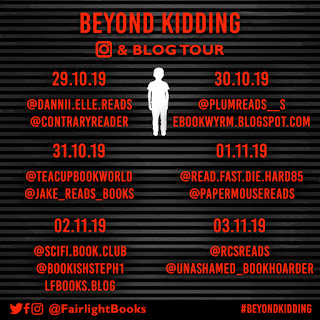 Rob's life is in a bit of a rut. Working in his friend's 'adult entertainment' shop, the marvelously named 'Empornium', drinking and takeaways is all there is. After a falling out he applies for a job at  Credit Co, embellishing his life to date in the hopes of making a better impression.

Part of that embellishment is inventing a son he doesn't have, which is all well and good until people want to meet him. Thinking on his feet (not his best idea!) Rob tells his colleagues his son, Brodie, has been kidnapped. As folk rally round to help him in his 'hour of need' Rob digs himself ever deeper until a situation that was already drifting out of control really goes off the rails. Rob gets a call from the police saying they've found his son... Everybody is happy now apart from Rob

Who is the little boy fitting the exact (made up) description of Brodie? How can people remember a boy who never existed? Is Rob going insane?

This is a good, weird story, quite humorous in places and quite 'laddish' in it's characterisation. And although the ending was kinda what I expected it still wrapped up well.