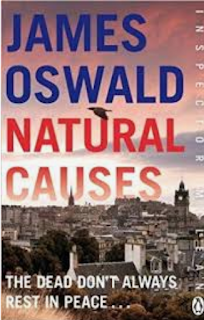 So, this was a strange one. I went into this, the first in the Inspector McLean series expecting a straight forward Edinburgh based Police Procedural. What I didn't expect was the supernatural turn it took part way through.

The story starts with two separate cases - a present day murder and the discovery of a corpse buried in horrific circumstances 60 or so years ago. It seems there is no link between the two (and I'll come to that soon) but, as is often the case in these kinds of story, there soon is. Wealthy and local beneficiaries to the city are soon being murdered in the same gruesome way and there murderers bodies are usually found not long after.

I really enjoyed this novel but I did have infuriating issues with the lead character and this is the bit where there may be spoilers so feel free to turn away now...


My main issues were with Inspector McClean himself. He's supposed to be a bright chap, an excellent detective but he came over at times as being absolutely dumb as a stump. He really couldn't see what was right in front of him.

Example 1 - He was looking for an elderly man, probably around the age of the other dead people - but he never even considered the STRANGE OLD MAN WHO HE'D HAD COFFEE WITH YESTERDAY AND WHO HAD OFFERED HIM A NEW JOB!!!

Example 2 - Someone on the force has been selling police scene of crime photo's (gruesome one's) to a website in Brazil. The only clue is the initials MB. This comes at the same time he starts seeing police crime scene photographer Emma Baird for meals and drinks after work. He even refers to her as Em (as in EmB!!!) but takes forever to put 2&2 together. Which leads to...

Example 3 - while he is hoping (and pretty sure) she is innocent he meets the other SOC photographer who he refers to as Malky and is corrected "It's Malcolm actually, Malcolm Buchanan Watt." (MBW, or MB anyone? - you might spot it but not our hero, oh no! Not even a sparkle.

Now, I get that clues are left for the reader to work things out but these might as well have been written in letters six feet high. It seemed a bit ridiculous that McLean never spotted them

The author did pull it back a bit later on when McLean starts putting things together and states "Christ, I can be thick at times." - Yes inspector, you can! 😜

The characters in the tale came across well even if they were the stereotypical norm - lazy sidekick, new boy, the officer above him that he doesn't get on with, the two love interests (greedy boy inspector) and Edinburgh itself feels real.

So yeah, I did have 'issues' with this book but the story itself makes me feel inclined to forgive those. I enjoyed it a lot, for all my moaning about it, and am ready to dive into the rest of the series