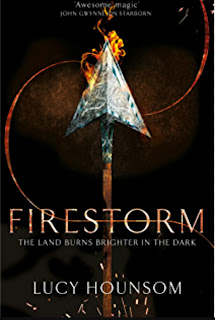 Tomorrow sees the release of Firestorm, the 3rd and final volume of Lucy Hounsom's (rather excellent) Worldmaker series.
As part of the promotional blog tour Lucy is stopping by The BlogCave today to tell us about the playlist she had while writing the series.
So, without further ado, "heeeeere's Lucy"

Worldmaker Playlist
I don’t tend to listen to music while I’m writing. Songs with lyrics are too distracting, while soundtracks remind me too much of the film or series they’re from. But since beginning Starborn, I’ve amassed a playlist for the trilogy: tracks that pick up on elements of character, others I’ve found inspiring, and some that just seem to fit the atmosphere of Acre. You know when you stumble across a track that seems to sum up whatever you’re writing or reading at a particular moment in time? Yep, that’s how this playlist chiefly came about.


Loreena McKennitt gets the top spot since at least three of her songs appear on my playlist: All Soul’s Night, The Mystic’s Dream and Night Ride Across the Caucasus. As you can probably tell from the titles, McKennitt’s songs sit half in the realm of fantasy already. In its three-part verse structure, for me All Soul’s Night resonated with Kyndra’s three trials in Starborn and actively inspired the scene where she inherits her power. Night Ride is a long track with an epic-sounding middle eight; I listened to it a lot during the dream-plan stage of Heartland. (Dream-plan is my name for the ephemeral stuff that goes on in my head before I make the real notes). The Mystic’s Dream I’ve long associated with Solinaris, as there’s an ethereal, ghostly echo about it that reminds me of bygone days of glory. The time travel thread in Firestorm, while a huge pain to write, gave Kyndra the opportunity to visit Solinaris, something I’ve wanted to do since starting Starborn.


Knight Moves, Suzanne Vega
My colleague introduced me to Vega and as soon as I heard this song, it made me think of Brégenne and the fragility she hides beneath a stone-faced façade. Vega’s album has that ‘honest’ feel of music that’s not been overproduced.


The Alchemist, Bruce Dickinson
So many of the lyrics in this song resonate with the character of Medavle, my haunted immortal Yadin. Medavle has had a dark life, driven by heartbreak and rage; I think Dickinson’s raw-sounding vocals really capture some of his hatred, his contempt and his unflagging pursuit of revenge on the man who murdered his people.


Running Wild, Roxy Music
I’ve long associated this track with Nediah and Kait and their shared history. It’s warm and nostalgic, seeming to encompass both the days they ran wild as young lovers and the new days after they’re reunited as much-changed adults.


Hunter, Dido
This is definitely a song for Kait and her struggle to regain both her independence and her purpose in life, which she feels she’s lost.


Iris, Goo Goo Dolls
I love my angsty-relationship tracks and this was one of the first I found that worked for Nediah and his feelings about his mentor, Brégenne.


Let Her Go, Passenger
Angsty-relationship track number two! This is the mushiest song on my playlist. Brégenne and Nediah form my trilogy’s core romance and they don’t see each other for a whole book. This song was great for when I needed to get into that mind-set of what it meant to separate them and how their relationship would develop if they could no longer rely on each other.


Through Glass, Stone Sour
This is probably Heartland’s core song and it’s really one for Char. He has to deal with assassins hunting him, his own waking power and Kyndra, who repels and attracts him in equal measure.


C’Hoant Dimein, Cécile Corbel. I believe this song is sung in Breton, so lyrics don’t exactly play a part. It’s hard to put my finger on why I’ve included it here except that I once saw it used in a YouTube fan video of Ronja Rövardotter (Ronia the Robber’s Daughter), a 1984 Swedish fantasy film, which for me evokes innocence and adventure with just a hint of first love. Heartland and Firestorm are both darker than Starborn and perhaps this song reminds me that true comradeship can be fostered in adversity.


If I Didn’t Have Your Love, Leonard Cohen
Ha, my mum hates this song, thinks it’s boring and bleak, but I like it because of its darkness. All the stuff about the sun losing its light reminds me of Hagdon, my tortured soldier.  He really is one of my favourite characters and it’s always a joy to write his scenes.

There you have it: short but – bittersweet now that the trilogy is done and the fellowship broken. Even so, these songs will always play a part in the story and I know I’ll think of it whenever I hear them. 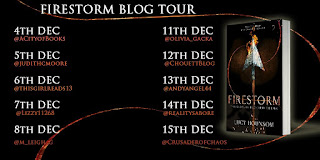 A full review of the series will be up on here soon.