The Thousand Eyes by A.K.Larkwood 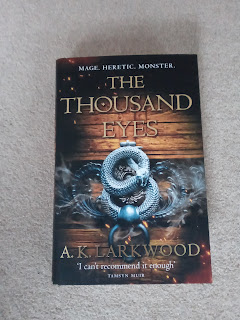 About The Book
Could you sacrifice your dreams to escape a nightmare?
Csorwe, Shuthmili and Tal survey abandoned Echentyr worlds to make a living. The empire’s ruins seem harmless but fascinating. Yet disaster strikes when they stumble upon ancient magic during a routine expedition. This revives a warrior who’d slept for an age, reigniting a conflict thousands of years old. And the soldier binds Csorwe to her cause.
Shuthmili is desperate to protect the woman she loves. However, as events escalate, she’s torn. Can she help Csorwe by clinging to her own humanity or by embracing her eldritch powers?
Tal heads home, but his peace is shattered when a magical catastrophe hits his city. The wizard Sethennai is missing and Tal can’t face seeking his former lover to ask for help. So, he flees – but there’s no escaping the future. For throughout the Echo Maze’s linked worlds, fragments of an undead goddess are waking. Soon all must choose a side.
~||~
First off, I've got to admit this is not a review of the full book as my review copy only arrived a few days ago. What it is is my thoughts on what I have read so far.
The story starts off 2 years after the end of The Unspoken Name and finds our heroes Csorwe, Shuthmili and Tal working as security/support for academics exploring dead worlds. Right from the off this feels like a big screen epic as they fly into The Hatchery on the dead world of the Echentyr, a serpent race that are resigned to the history books, along with their Serpent Goddess . . .
Except they aren't! There is one survivor and when Csorwe and co. rescue them the troubles begin and the Serpent Goddess is back!
I wasn't expecting the jump that moved the story forward to 15 years on but it worked for me as it was a chance to see the leads as older people and how the world has changed now that the Serpent Goddess rules most. Will our heroes be able to put everything right? I'll let you know when I get to the end of the book so watch this space.
What Larkwood did well in The Unspoken Name was the world building and, thankfully, that is carried on in The Thousand Eyes. It feels very visual and that's what I like.
As for the main characters, Tal stands out for me so far as someone who has grown (seeing him 15 years on with a protégé who is pretty much a replica of younger Tal is good fun). There seems to be less of Csorwe and Shuthmili so far but that may change I guess.
The Thousand Eyes is a faster moving tale than The Unspoken Name and feels more of a Fantasy/Sci-fi hybrid than I remember the first being but that's not a bad thing.
I've been waiting what feels like ages for this book to be published and (so far) I'm not disappointed in the slightest
Thanks to Black Crow PR for inviting me onto the tour for this book and for providing the review copy (and hey, look at the cover art, isn't it rather gorgeous).
Please have a look at the reviews by the other bloggers on the tour (below) 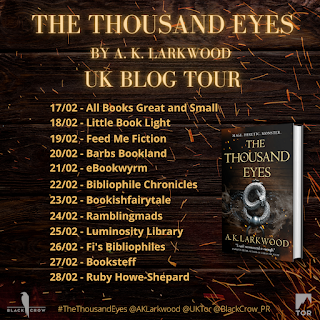