Fury of a Demon by Brian Naslund 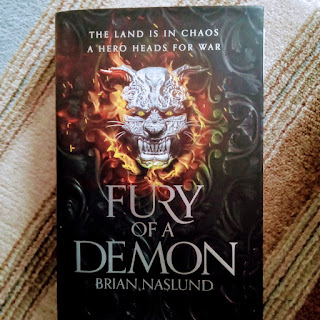 The land is in chaos as a hero heads for war.

Commanding a devastating army of skyships, Osyrus Ward has conquered most of Terra. And to finish the task, he’s building a machine of unparalleled power. With it, he’d be unstoppable – and dragons would be wiped from the face of the earth.

Bershad and Ashlyn are leading a desperate rebellion, but they’ve been trapped within the Dainwood by Ward’s relentless mercenaries. The rebels pray Ashlyn’s dark magic will give them an edge, but her powers are well-known to their enemies as they draw ever nearer. Out of options, Ashlyn must embark on a dangerous mission to save her fledgling army – or be crushed by Ward’s soldiers.

Bershad was once invincible in battle, but this very power may prove his undoing. Now, with every new wound, his humanity is slipping further away. Bershad seems to be Terra’s last and best hope against terrifying forces. But to save the world, will he become the nightmare?

I think it's fair to say I've loved this series from day one so seeing it come to an end is a bit of a downer but it's also fair to say it's gone out in style.

What impressed me most I think (apart from the dragons - I mean, come on, who can't be impressed by dragons as awesome as these) is the way the magic system develops to a more sciencey/maybe steampunky type and how natural this feels. To win, to progress you have to adapt and that really feels like the case here.

Our heroes, Flawless Bershad and Ashlyn have gone through the wringer at times to be where they are at the start of Fury and things really don't get any easier for them throughout the book. I was left at times wondering who would make it through to the end and, yes, I actually cared about the characters wellbeing - for me that's the sign of a good storyteller.

Naslund's world building really worked for me - there's a difference between knowing the lands because you can see a map and knowing them because 'you are there' in your mind. Another strength of Naslund I guess.

As final battles go Fury really turns up the dials here and I was quite exhausted by the end but thoroughly enjoyed it. And I guess it's not really the end for me because I'm going to give it a couple of months then I'm going to go back to the beginning and read all three back to back - can't wait 😉

Highly recommended and a very much deserved 5/5*