Kings of the Wyld by Nicholas Eames 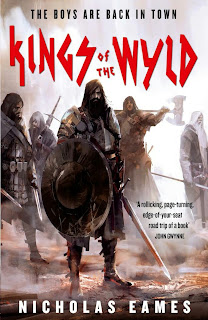 I'll be honest, I've had my eye on this ever since I clapped eyes on the cover a few months ago... and I'm pleased to say it didn't disappoint.

As the story starts we meet our lead hero, Clay 'Slowhand' Cooper, former member of the titular Kings of the Wyld, the most feared and famous mercenary band of their time. That time is in the past though and he is now making his living as part of the Town Guard and spending the evenings with his wife and daughter. Retirement from The Kings is suiting Clay just fine... until the day he comes home to find Gabe, The Kings old gang leader on his doorstep, looking all the worse for wear and wanting to ask a favour.

As it turns out Gabe's daughter has taken up the role of mercenary, set up her own 'band' and ended up in a city under siege at the other end of land. Gabe is going to try and rescue her but he can't do it alone. He wants to reform The Kings of the Wyld for one last mission.*

It's time to get the band back together!

What follows from here is one of the craziest adventures it's been my pleasure to read in a long while. The world here is huge and populated with a vast array of races and creatures. The laughs come quick and often but it is not just a comedy novel, more an adventure with comedic elements.


The 'Kings' themselves (one of whom actually IS a king now) are a good fun bunch to spend time with, so much so that the nearly 500 pages flew past way too quickly. I'll be honest, I didn't want it to end.

How best to describe this book? I'd probably say Dungeons and Dragons meets Spinal Tap - and I guess that tells you all you need to know. The next time The Band reforms I promise you one thing - I'll be in the front row.

*Let's be honest though, this book is so damned good there's no way this will be the last mission.
Posted by Ebookwyrm at 07:23