The Children of Gods and Fighting Men - Shauna Lawless 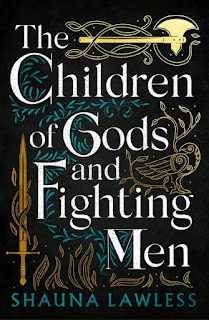 'They think they've killed the last of us...
981 AD. The Viking King of Dublin is dead. His young widow, Gormflaith, has ambitions for her son – and herself – but Ireland is a dangerous place and kings tend not to stay kings for long. Gormflaith also has a secret. She is one of the Fomorians, an immortal race who can do fire-magic. She has kept her powers hidden at all costs, for there are other immortals in this world – like the Tuatha Dé Danann, a race of warriors who are sworn to kill Fomorians.
Fódla is one of the Tuatha Dé Danann with the gift of healing. Her kind dwell hidden in a fortress, forbidden to live amongst the mortals. Fódla agrees to help her kin by going to spy on Brian Boru, a powerful man who aims to be High King of Ireland. She finds a land on the brink of war – a war she is desperate to stop. However, preventing the loss of mortal lives is not easy with Ireland in turmoil and the Fomorians now on the rise...'
}-{
First things first I have to say that despite my best efforts I have not finished this book yet so this is only a 'my thoughts so far' post rather than a full review. But I can see a few late nights ahead as it is a story that grips from the off and isn't easy to put down.
Ireland (981AD) feels a magical, mystical place, the perfect setting for the battles, both physical and political between the Fomorians and the Tuatha Dé Danann. The story felt a bit Game of Thrones like to me (which plays right into my wheelhouse) mainly down to one of the viewpoint characters, Gormflaith, the king's widow, doing everything she can to seat her son on the throne (like a certain Lannister). But TCOGAFM is not a Thrones rip-off, it is very much it's own story - and a very well told one at that (and it is only the start of a series, yay!!😃).
I've often struggled with Irish name pronunciation and if you are the same then worry not - as well as map in the front of the book there is a cast list with full pronunciation guide. I found it a godsend.
So, ancient Irish historical fantasy with Immortal races, politics and battles in an atmospheric and well told tale. I'm only just over the halfway point but it's certainly looking like it's going to be a 5* read.
Many thanks to Head of Zeus for inviting me onto the Blogtour and providing the review copy. All opinions are mine and mine alone.
Please have a look at the reviews by the other bloggers (below) and come back later for my full review. 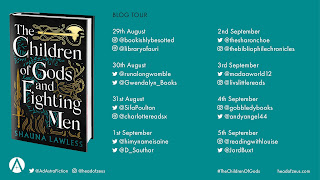 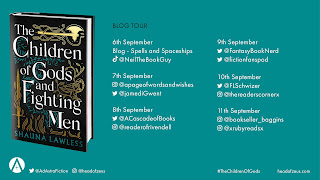