'Fellstones takes its name from seven objects on the village green. It’s where Paul Dunstan was adopted by the Staveleys after his parents died in an accident for which he blames himself. The way the Staveleys tried to control him made him move away and change his name. Why were they obsessed with a strange song he seemed to have made up as a child?Now their daughter Adele has found him. By the time he discovers the cosmic truth about the stones, he may be trapped. There are other dark secrets he’ll discover, and memories to confront. The Fellstones dream, but they’re about to waken.'

Ever since I was young I've had a leaning towards stories with remote villages and standing stones (I blame Children of the Stones, a weekly serial on kids TV in the 70s) so Fellstones was a winner for me straight away because it has all that and more.

Paul Dunstan was brought up in the village of Fellstones by The Staveleys after his parents died but left as soon as he was able to - and it's easy to see why. They seem ok but certainly have a plan for Paul's future and to that end are very controlling. So much so that Paul changes his name when he leaves in the hopes they will never be able to track him down. There's something 'off' about the whole village to be fair, not just The Staveleys and although Paul blames himself for his parents deaths it's kinda obvious that other forces were at work.

Anyhow, The Staveleys daughter, Adele, finds him and begs him to come 'home' to say goodbye to a dying parent. He doesn't want to but goes anyway. On arrival things are as weird as he remembers but there are other things too, memories he'd rather stayed hidden.

And the stones, those tall silent sentinels, benign and peaceful looking but not for long. . .

What Ramsey Campbell gives us here is Folk Horror and Cosmic Horror at it's best. A slow burner, true, but the sense of impending doom pervades throughout, that feeling that you want to turn the page but also you are nervous to do so - and I do so love that feeling.

I've been a fan of Campbell's books since the 80s and rate this as one of his best. A definite 5* read. 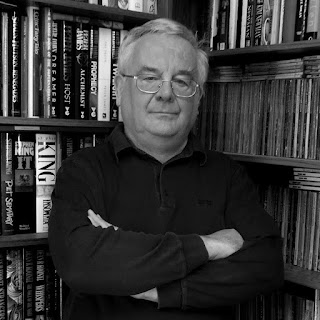 Thanks to Anne Cater and Random Things Tours for inviting me to review this book and to Flame Tree Press for providing a review file. All opinions are my own.

Please take time, if you can, to read the reviews by the other bloggers on the tour (below). 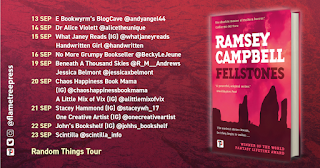