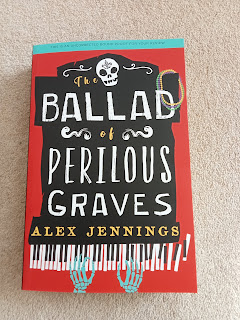 In a fantastical version of New Orleans where music is magic, a battle for the city’s soul brews between two young mages, a vengeful wraith, and one powerful song in this vibrant and imaginative debut.

Nola is a city full of wonders. A place of sky trolleys and dead cabs, where haints dance the night away and Wise Women keep the order, and where songs walk, talk and keep the spirit of the city alive. To those from Far Away, Nola might seem strange. To failed magician, Perilous Graves, it’s simply home. Then the rhythm stutters.

Nine songs of power have escaped from the magical piano that maintains the city’s beat and without them, Nola will fail. Unexpectedly, Perry and his sister, Brendy, are tasked with saving the city. But a storm is brewing and the Haint of All Haints is awake. Even if they capture the songs, Nola’s time might be coming to an end.

I've always enjoyed books with music at their heart. Somehow the music makes the story feel even more alive, almost a soundtrack to the written word before me. When you throw in the Deep South I'm hooked before I've even looked at the first page and that was certainly the case here. And, my instincts were right.

There is so much going on in Nola (an alternative New Orleans). The music is alive, graffiti floats through the air and the dead share the streets with the living. It's almost, at times, like a massive 60's technicolour trip. But trouble is coming to Nola, the city is losing it's beat and Perilous "Perry" Graves and co might not be enough to save it!

I'll be honest, there were times when I wasn't sure what the hell was going on. There were even times early on when I nearly gave up on it but something kept pulling me back in - and for that I'm grateful as it turned out to be a cracking read.

Alex Jennings has written something special here, I just feel I'm going to have to read it again to get the full benefit