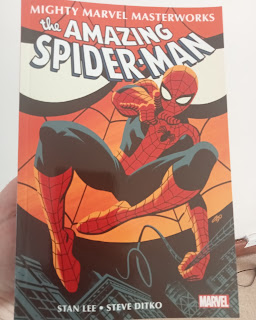 So, here we are, Spider-Man's origin story from Amazing Fantasy #15. Yeah, I know, it's nothing we don't already know - Boffin schoolboy, bitten by radioactive spider, gets powers, "with great power comes great responsibility" etc, etc. We've seen the movies but there's something a little bit special about seeing it as it was originally drawn and written. This is from 1962 and people picking up AF#15 were meeting Spidey for the first time, and this is how they saw him. They weren't to know he'd still be slinging webs 60 years in the future.

After AF#15's introduction this volume gives us issues 1-10 of The Amazing Spider-Man with such villains as Doctor ish Octopus, Vulture, Electro, Sandman and the lesser known Terrible Tinkerer and The Living Brain. These are all stories I've never seen before and watching Peter Parker (or Peter Palmer as he's curiously called in Spider-Man Vs The Chameleon) come to terms with his powers and deciding on his future path has been an absolute treat. I'm certainly going to be looking for the other titles in the Mighty Marvel Masterworks series (Captain America, Fantastic Four, X-Men -but I think I'll give Daredevil a miss, wasn't a fan).

The 60's vibe is strong in this volume so the dialogue sometimes feels a bit off but hey, this was written 60 years ago - it's almost historical 😉. It'll be interesting to see how this develops in the decades that follow.

And speaking of which, next week sees Comic Book Monday come right up to the here and now with a look at Rivers of London: Bodywork, The Deluxe Writer's Edition and a chance to look at both how much comics have come on since Spidey first donned the Spandex and just how a graphic novel is constructed.

See you next week 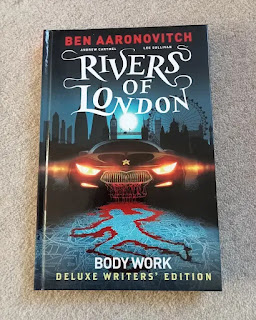