The Justice of Kings by Richard Swan 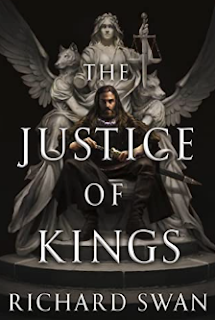 Billed as a mix between Judge Dredd and the Witcher it was never really a question of would I want to read (but thanks for asking Nazia at Orbit) this book, more a question of how soon can I get my paws on it.

Set in the usual late medieval type world we often get in fantasy fiction the story follows Sir Konrad Vonvalt, a Justice whose role in life is to travel the land hearing disputes, solving crimes and dishing out... well, justice (yes, very much a Judge Dredd vibe here) But he does not get to tell the tale though, that falls to his Clerk, Helena so we get to see the world and his actions through her eyes.

And an interesting world it is too. I said earlier that the setting is a typical late medieval one but that may be doing it a disservice - there are things afoot that suggest we may be on the edge of something big and I'm expecting to see a very different looking world when this series reaches it's conclusion (or maybe before, who knows)

One of the things that attracted me to this book was that there was a murder to be solved and that felt like something that would be a refreshing change from the usual prophesy/dragons/chosen one (all of which I love but I'm also a fan of gritty crime fiction too) and again it didn't disappoint. Felt like a welcome breath of fresh air.

Politics, religion, intrigue, murder - all set in a believable and well crafted world. Ye Gods I bloody enjoyed this book.

And also a massive well done to the cover designers - that is a cover and a half that, Stunning!