Nothing To Hide (Constance Fairchild #2) by James Oswald 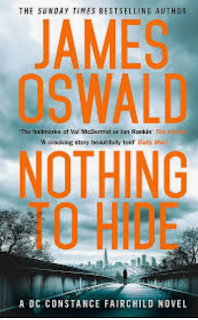 Another enjoyable read from Mr Oswald. This is the second in his Constance Fairchild series and finds her still away from work as her last case nears trial. She's soon back on the job though (unofficially) when a young man is found near death and very mutilated beside the bins near her home.

As before, in No Time To Cry, there are guest appearances by characters from Oswald's other detective fiction series (The Inspector McLean books) which I really enjoyed and this does make me wonder if Fairchild and McLean will team up at some point in the future.

The only downside to this book was that the 'Big Bad' was kinda obvious right from their first appearance but that didn't spoil it really, just less to puzzle out.

The injuries inflicted on the victims was pretty gruesome but tied in with the reasoning for them so not just gratuitous violence.