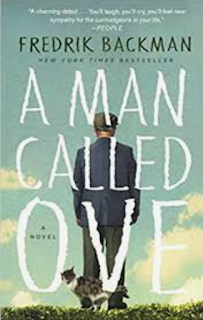 This has to be one of the funniest and saddest stories I have ever read.

Ove comes across, at first, as a bit of a Victor Meldrew type, grumpy, exasperated with other people's seeming incompetency, but as the story unfolds the real Ove is revealed as someone totally different.

The main gist of the story is that Ove's wife died 6 months prior to the story starting and he has decided it is time to join her. His attempts though are always ambushed (unwittingly) by his various neighbours, all of whom seem to need Ove's help. And this 'help' is where the true character of Ove comes to the fore.

Ove is a no nonsense chap, as down to earth as they come. Even at his absolute grumpiest he shines.

At various times there's laughter, tears and all things between the two. When I started the book I thought we are all a little bit Ove at times but by the end that had changed - we should all strive to be more Ove than we already are.
Posted by Ebookwyrm at 23:00