One Word Kill by Mark Lawrence 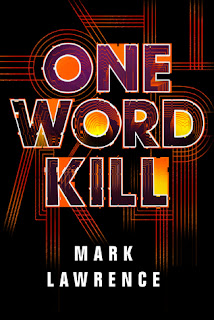 Ah, the 1980's. I must say I do have a penchant for stories set in this decade - probably because this was the time of my youth so I guess it brings back memories of then.

Anyhoo, to the story. Our hero is Nick and as we join his story things are not looking good for him as he has just found out he has leukemia. In the plus side he and his friend's D and D group have a new member...and it's a...GIRL, Mia 😱.

When a familiar looking man starts following Nick things start to get weird. He tells them they have a mission of sorts that they need to complete in order to save Mia.

From his previous works I've known for a while that Mark Lawrence is an excellent teller of tales but with this new series he has, in my opinion, stepped it up a gear. Maybe it's because I was a teen at the same time as the characters but this story really spoke to me.

And then there's the ending, the three very last words put a grim on my face that was still there 8 hours later (I'd finished the book just as I arrived at work, that's how I know that).
I'm really looking forward to where this story will go with the rest of the series - and I've just seen book 2, Limited Wish, is up on NetGalley so I'll find out soonerrather than later.

One Word Kill 6/5* (it was already 5/5* before that punch the air punching ending which deserved an extra star so, my blog, my rules)