The Blood Road by Stuart MacBride 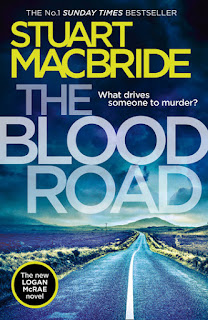 The Blood Road is the latest in Stuart MacBride's latest Scottish Crime series featuring his detective Logan McRae. As such it probably helps to have read at least some of the previous volumes as that will help you with the who's who of secondary characters.

The story itself I rather enjoyed. It starts with a dead body in a car - straightforward enough until the body turns out to be that of a high ranking police officer who died and was buried 2 years previously. Add to this another dead pc (which may or may not be suicide) and a crime ring that is kidnapping small children for saleand it's, all in all, a fairly gripping story.

Where it fell down, for me, was the characters. McRae himself was portrayed quite well but his fellow officers just didn't work for me. He has several fellow officers who seem too much like attempts to make comic sidekicks, but actually come across as stupidly irritating and for me spoilt the pace of the story. The worst of the worst was PC Stewart Quirrel (aka Tufty), the most childish and needy of people. Probably meant to be humorous but I just felt like giving him a slap.

That said though, I would certainly consider reading more in the series