The Spectacular Sisterhood of Superwomen by Hope Nicholas - A Review 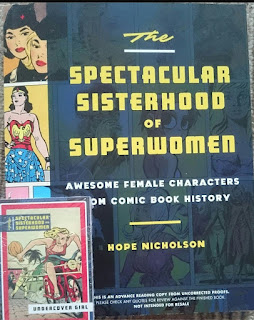 So, this is what I have been dipping into for the last few weeks. The Spectacular Sisterhood of Superwomen (subtitled 'Awesome Female Characters From Comic Book History') is one of those books that is exactly what the title says it is. What we have here is a decade by decade look at female comic book characters from the 1930's (with the likes of 'Sally the Sleuth' and 'Torchy Brown') right up to the present ('Deathface Ginny', 'Maika Halfwolf') with each decade getting a 'Hero Of The Decade', which gets, understandably, slightly more coverage.

To look at some of these 'comic heroines' you can't help but cringe at how bad some of them seem (Angel O'Day - A martial-arts trained detective who solves crime with her gorilla partner, being a prime example) but there are a lot that would be worth looking up at the next comic fair. There is, especially in the earlier decades a fair number of 'feisty female detectives' and 'heroine nurses' but these soon give way to more superhero types as time moves on.

Each Superwoman entry is accompanied by an illustration or comic panel (although, this being a preview copy, not all are available in my edition) which gives you an idea of the quality of artwork through the decades (and yes, a lot of them seem to be "how many curves can we give our heroine" and aimed as much at the titillation of male readers as anything).

I will admit that I didn't know of a lot of these Superwomen but I guess I can put that down to marketing and me not being 'target audience' I guess. I do. however, feel that this book has given me a better idea of the role of these heroes in the history of comics.

In short then, an interesting and informative look at the role of Superwomen in comic books, a very nicely put together volume and a must for those with an interest in the genre. More a book for dipping into than a cover to cover read but certainly one I am proud to have on my shelf.