The Book of Gothel - Mary McMyne 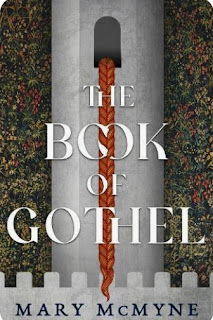 Everyone knows the story of Rapunzel in the tower, but do you know the tale of the witch who put her there?

Enter a world of dark magic, mysterious woods and evil princes. This is the truth they never wanted you to know, as only a witch might tell it.With her strange black eyes and even stranger fainting spells, Haelewise is shunned by her village, and her only solace lies in the stories her mother tells of child-stealing witches, of princes in wolf-skins, of an ancient tower cloaked in mist where women will find shelter if they are brave enough to seek it.But when her mother dies, Haelewise is left unmoored. With nothing left for her in her village, she sets out to find the tower of legend-a place called Gothel, where Haelewise meets a wise woman willing to take her under her wing.But Haelewise is not the only woman to seek refuge at Gothel. It's also a haven for a girl named Rika, who carries with her a secret the Church strives to keep hidden. A secret that reveals a dark world of ancient spells and murderous nobles behind the world Haelewise has always known.
My Thoughts
Rapunzel is one of the first fairy tales I remember so the chance to read the origin story behind the witch who put Rapunzel in the tower was one I couldn't really refuse. The story follows Haelewise (aka The Witch) from her younger days. Early on she loses her mother and from then on is treat badly by her fellow villagers who do not understand her fainting fits. Her one shot at happiness is her friendship with Matthaus, she thinks her future is all mapped out with him but his father soon puts a stop to that.
She leaves the village in search of a tower which offers refuge and hopes to learn about herself and her fainting fits. And there the journey to becoming the witch we know begins.
I found this to be a comfy read and rather enjoyed it. The setting of ancient Germany felt right and I was rooting for Haelewise from the off.
Recommended 4/5*
The Book of Gothel is published by Orbit and is out now
Posted by Ebookwyrm at 23:28