The Way Of The Worm - Ramsey Campbell 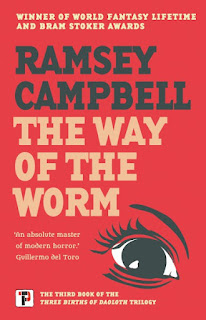 'More than thirty years have passed since the events of Born to the Dark. Christian Noble is almost a century old, but his and his family’s influence over the world is stronger than ever. The latest version of their occult church counts Dominic Sheldrake’s son and the young man’s wife among its members, and their little daughter too. Dominic will do anything he can to break its influence over them, and his old friends Jim and Bobby come to his aid. None of them realise what they will be up against – the Nobles transformed into the monstrousness they have invoked, and the inhuman future they may have made inevitable . . .'
So, here we are at the end of Mr Campbell's trilogy and the final chance for Dominic Sheldrake and friends to defeat Christian Noble's (now global)  dark church.
Dom, Jim and Bobby are getting on a bit by the time this endgame comes around experience (or so it is said) but can anything really have prepared for the hellish Lovecraftian horrors ahead? Even more so when Dom's family are involved.
I have enjoyed this series from the page 1 and waited eagerly for each new episode, watching the Sheldrake and co. go from youth to old age and seeing how the Noble's church and plans would develop. What has surprised me most is how much story Campbell manages to fit in the books, even when, at times, it feels like it is a slow burn. When he pulls everything together the results are as good, if not better, than anything out there in the genre. Campbell has been doing this job for decades and this trilogy 'The Three Births of Daoloth' shows the master still at the top of his game.
I don't like to use phrases like 'edge of your seat stuff' but The Way Of The Worm really was that
Highly Recommended (best read as a series though)  5/5* 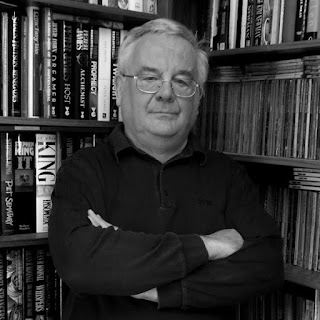 Many thanks to Anne Cater and Random Things Tours for inviting me onto this blogtour, and please check out the posts by the other bloggers (below) 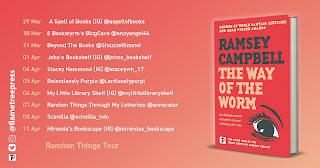