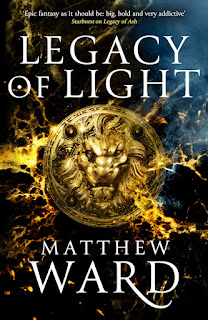 Welcome to Day 4 of the Legacy of Light blog tour. Today sees a guest post by the author himself, Matthew Ward, on how the next generation step up and come into their own in this final book in the series. It's a good one, so, without further ado...

I’ve loved generational storytelling for as long as I can remember, though it took me a long time to figure out why.

I think in the beginning, I liked that The Lord of the Rings had a bunch of familiar names from The Hobbit, which is reassuring when you’re seven years old, and tackling a book that everyone is (wrongly) very clear that you won’t understand¹ . But I think even at that point I appreciated that Bilbo and Glóin were still around, and had families – even if I was upset that Balin fell down a mine shaft onto some orc arrows² . It meant that I wasn’t just reading a story, but a history. It made it all real.

The same was true when I stumbled onto Shannara a few years later. Except here, between the first two series anyway, you’re talking about four generations of Ohmsfords and Leahs entangled in sorcerous shenanigans.

Shannara also added something new to the mix. While The Lord of the Rings leans towards the idea that heroes are predestined to be leaders (and vice versa)³  and therefore naturally rise to the fore of weighty events, Shannara takes the line that ‘well, weighty events once touched your ancestor, so now you and all your descendants are screwed, because magic remembers and someone’s got to do the heavy lifting’.

Sidestepping genres and media into the world of superhero comics, the same’s true of the Geoff Johns/James Robinson/David Goyer run on JSA (Justice Society of America)⁴ . Where most superhero comics are frozen in time – Peter Parker has been Spider-man for 60-odd years at this point – JSA sees costumed identities passed down to inheritors across the decades from the team’s original 1940s founding to the early 2000s and beyond¹¹.

As you might expect, JSA’s a bit cheerier than epic fantasy fare (although not without its bleak moments), and it finally offered up the missing piece of the puzzle.

In The Lord of the Rings and Shannara, we seldom see the generations actually interact¹² . Generally, the elder folks are dead and not available for comment¹³ . In JSA, they’re mentors, role models, cautionary tales and slices of living history. Crucially, their presence and deeds offer a new perspective on the world they inhabit … not only to the reader, but also to their inheritors. In turn, their inheritors’ perspective – and more importantly, how they react to the examples set by their predecessors – makes that world a richer, more dynamic place.

Because let’s be honest, in real life or fiction, no generation comes of age without casting a leery eye at the preceding one.

JSA set my love of generational tales in stone. You see, more than anything else, a story has to feel alive. Great characters are vital, sure, as is a setting that lives beyond the words on the page to keep unfolding in the reader’s mind. But the real magic happens when the characters and world evolve in step with one another. There’s no finer way to show this than with the passing of the torch, and the rise of a new generation … and how the new generation rises.

Because we see this play out all around us, all the time. In our families, in our workplaces, in the many-headed hydraic¹⁴  horror that is the rolling news cycle. Half of what we know about our world is seeing how other people grow and adapt to it. We take note of what works and what doesn’t, and plot our own course accordingly … with mixed results.

Why wouldn’t our characters do the same? The choices they make – or don’t – tell us so much about their role models and the society they’ve grown into. And it’s never more dramatic than when children come of age and find their place.

So it’s probably not surprising when I say that the Legacy Trilogy was always going to be a generational story²¹ . Hell, it’s there from the start. Legacy of Ash is predominantly about Viktor, Josiri and Calenne wrestling with their parents’ mistakes. In Legacy of Steel it’s Melanna’s turn. And by the time we get to Legacy of Light, it’s time for the new generation to emerge from the shadow of those decisions²² .

Though they’ve been present in previous books, Legacy of Light marks the first time that Sidara, Constans and Altiris really get to grips with what they want, and how far they’re prepared to go to achieve it. Though she’s a few years older in both years and mileage, the same can be said of Melanna Saranal, who’s starting to realise – as so many of us do – that the challenges don’t go away, they merely change form. All four are fighting to find their place in a tumultuous world, eyes cast back at their role models with everything from adoration to disdain.

Where do they end up? Well, you’ll have to read the book to find out, but the joy in the writing – and hopefully the reading – is seeing whose influence they embrace, whose they reject and what these characters determine for themselves. The fate of the Tressian Republic and the Hadari Empire will turn on those choices …

Matthew Ward is a cat servant, creative consultant and author of the Legacy Trilogy, the final book of which – Legacy of Light – is available now. Follow him on Twitter (@thetowerofstars) or check out his website www.thetowerofstars.com

¹ Fog on the Barrow-downs scared the absolute living shit out of me, however.

³ Actually, this always upsets me whenever I re-read The Lord of the Rings. Goes to show a little characterisation goes a long way.

⁴Think about it. How many non-magical characters are royal, or royal adjacent? Gimli is of Durin’s line, cousin to both Thorin and Dáin. Legolas is a prince. Frodo, Merry and Pippin are all (presumably) landed gentry. Boromir is a pretender to the throne. Only Sam, bless him, represents the common folk, led on a merry chase from court to palace to evil overlord’s dungeon …

¹¹ Which I heartily recommend to anyone who loves superheroes. It’s some of the finest serialised storytelling going.

¹² There’s a fair chunk of time travel, so it gets a bit squirrely in places.

¹³ This is true of a lot of fantasy fiction, of course. It doesn’t pay to be the wise mentor, esteemed parent or suchlike to the plucky chosen one. Disney get a lot of stick for the ‘dead parents’ cliché, but they’re hardly alone.

¹⁴ In The Lord of the Rings it tends to be the work of orcs although rivers seem to play a prominent role. You heard it here first: Tolkien had a phobia of fast-flowing water – he was a vampire all along. Or something. allowed to make words up. It’s in the job description.

²¹And in turn part of a much larger generational story, but we’ll see where we get to.

(apologies for the strange numbering on the footnotes, for some reason the numbers didn't appear when I copied the file and my phone, on which I blog, only does small numbers from 1-4) 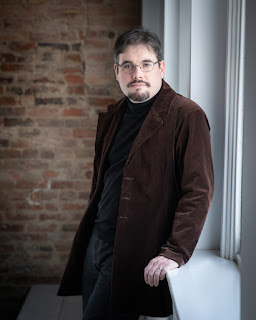 Thank you very much indeed to Matthew for inviting me to join the tour and share space with some awesome fellow bloggers - please take time to have a look at their posts (and share them around on social media if you feel that way inclined). 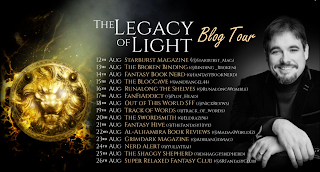 Legacy of Light by Matthew Ward is published by Orbit and will be available to buy from the 19th of August. As with the previous volumes (Legacy of Ash, Legacy of Steel) it's a humungous beast of a book and a cracking read so far (I'm nearing the end of my review copy and will post a full review when I'm done)