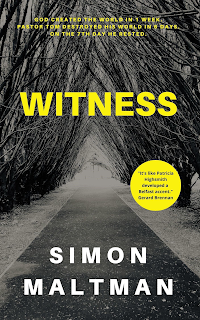 Pastor Tom is not your average priest. With problems at home and at work, issues with alcohol and a background with links to the paramilitary it's fair to say this Irishman's life is in a mess. Making connections with his past probably isn't his best idea (and trust me, he seems to have plenty of bad ideas) and 'Witness' charts his downward spiral as he desperately tries to do the right thing to save those that mean most to him.
I'll be honest, I had some problems with this book - mainly with the character of Pastor Tom. He is not a particularly likeable chap and I really did not engage with him. Making bad decision after bad decision I felt like reaching into the pages and giving him a good shake. I didn't overly care about him and I feel I like to have some resonance with lead characters.
On the plus side the supporting cast were a lot more fun even if they did often come across as a bit stereotypical Irish at times.
As a general rule I enjoy Simon Maltman's books but Witness really didn't do much for me.
Plenty of action but a lead I didn't care for so 2.5/5* (not great but not terrible)
Posted by Ebookwyrm at 08:05