The '86 Fix by Keith A Pearson 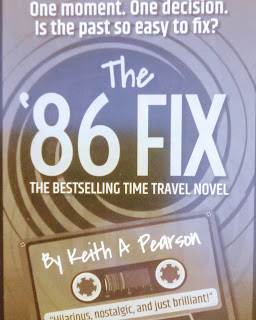 Just imagine if you could go back in time and change the one thing you did that you feel gave you the life you now have. Would you take it?

Craig Pelling is stuck in a loveless marriage, in a job he hates and is being forced out of that very same job by his former school bully (who hasn't changed). He is also very much out of shape, short on cash and rapidly reaching the end of his 40s. And he knows exactly where things went wrong for him.

One weekend back in 1986 a chance meeting with the then love of his life leads to him sorting out her young brother's computer problem and as a 'thank you' she takes him to her room for some 'fun'. The experience is a disaster and Craig is in a slump which leads to him not doing as well as he expected in his exams, to his poor career options, meeting and marrying Megan - you get the drift.

Due to an (as I thought) rather clever chance Craig gets to go back to that weekend 30 years ago and, with the lessons of 30 years of living, but in teenage Craig's body he sets out to guide his future down a better path. But can you predict the future even if you fix the past in your favour?

I stumbled across this book by chance as the author was a contestant on Radio 2's Popmaster last week. He said he was an author of "Low fantasy and Time Travel Fiction" so I looked him up on Amazon and decided to have a look at The '86 Fix as I was a teenager around that time too and thought the era would be good for me (and it certainly brought back memories - Um Bongo, Quatro, Texan bars, West End Girls, Commodore 64s). I'm certainly glad I did as this book has been an absolute joy, keeping me going for 'just one more chapter' several nights in a row. And then to find 'THAT' ending - well, it caught me out. I didn't know there was a second book but I bought it straight away and tore into it the same day. But more on that later in the week.