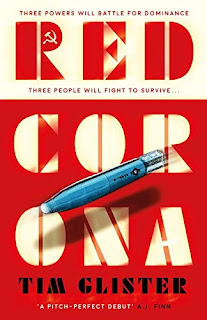 'British secret agent Richard Knox has been hung out to dry by someone in MI5,

and while his former boss lies in a coma, he needs to find the traitor in their

through space, a technology that could change the world. But a terrible

accident forces her to flee.

Desperate for a way back into MI5, Knox makes an unlikely ally in Abey

Bennett, one of the CIA’s only female recruits, realizing that Valera’s

technology in the hands of the KGB could be catastrophic for the West.

As the age of global surveillance dawns, all three have something to prove.

Set against a backdrop of true events during the Cold War, RED CORONA is a

This debut thriller from Tim Glister is one of my stand-outs from 2020. Felt, to me, like a old time Bond type story but with a more modern view point (ie the female characters aren't just there to look nice).

Richard Knox has to find the Mole in MI5 after he can give no alibi for where he was the night his boss ended up in a coma and his time is running out.

Where the story really picked up for me though was with the Irena Valera character. She doesn't come across as a typical Russian thriller type. She has discovered a technology that could raise Russia's standing in both the Cold War and the Space War but is conflicted about how it will be used - until the decision is made for her and she has to flee. Thanks to Anne Cater for inviting me onto this Blogtour and to Point Blank for providing the copy. Please try and have a look at the other posts by the bloggers on this tour (below) 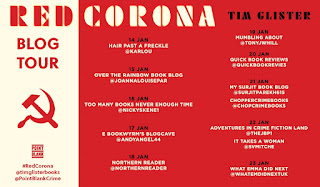