Beyond Broadhall (The 86 Fix #2) by Keith A Pearson

Beyond Broadhall is the sequel to the time travel novel The 86 Fix which I reviewed here earlier in the week. It is impossible for me to pass on my thoughts without spoilers for book 1 so if you haven't read that or are part way through it you might be better off coming back to this review later on. 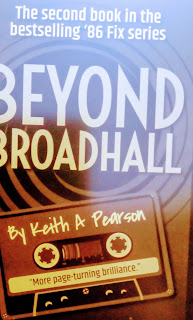 As The 86 Fix finished we were left on a bit of a cliffhanger. Craig Pelling had travelled back to 1986, spent a weekend their righting personal wrongs and decided, just as the clock to his return was ticking down that he wanted to stay in 1986. For this to happen he sought to run as far from his Commodore 64 (the time travel maguffin) as he could but his plan failed and he returned to the present where his problems were only just beginning. Craig wakes up in hospital to find he died at midnight on that Sunday night in 86 when he was sent back to the here and now. By all accounts he doesn't exist yet here he is.

Beyond Broadhall doesn't have as much time travel as 86 Fix but that is mainly down to the fact that it covers Craig finding out the after effects of his actions in 86 and, trust me, they are not all good.

This is the perfect companion novel to 86 Fix as the story flows seamlessly from one book to the next, to the extent that it feels more like one book in two parts rather than two separate books.

By the end Craig kinda knows that what he changed in the past probably wasn't the best thing to have done and gets the chance to finally get things right. He does this by realising it's not the past he needs to change, it's Craig himself.

I really enjoyed The 86 Fix and Beyond Broadhall has extended that enjoyment. The best compliment you can give a book is that you miss it when the story is ended and you know your time in that world, with those characters is over. This book certainly achieved that.