The Reaper by Steven Dunne

Well, this was a strange one. I finished this in 2 days and really enjoyed it...or thought I did. As a story this rattled along at a fair old pace, every spare minute a chance to get back to it. But larer, given time to let things sink in, there was so much wrong with it.

The story itself was good enough. After the Reaper case, multiple murders of families in London DI Damen Brook loses his family and almost his sanity. He relocates to Derby and all seems 'ok' until another family is found murdered in the same manner as the Reaper killings. After all these years why has The Reaper struck again and why has he followed Brook to Derby?

The story follows two time lines, one in London, one in present day Derby and slowly the two converge to give answers but when those resolutions came it felt kinda 'muddy' to me. It's obvious from early on who The Reaper is but Brook cannot find proof and even ends up befriending the suspect in the hopes of tripping him up. It's this issue, this obsession, that leads to the break up of his marriage.

Now, what bugs me is the character of Brook himself. He's your typical screwed up cop, the kind we see in most crime fiction these days. Many of his colleagues don't like him but the ladies certainly do. At one point early on he sees an attractive young lady watching his house. She says she is a student visiting possible accommodation but in no time at all he is letting her stay the night at his - I mean, I know it advances the story and his character but who does that really? And, surprise surprise, she ends up in his bed (and that scene itself is the height of weird). Then there is his colleague who he had a one night fling with, and still quite fancies, and when he goes back to London on investigation duties his first choice to accompany him on the journey? Yup, you guessed correct. He books himself into the worst rehab clinic in the country at New Years in the hopes of getting some info from files on a former patient and in no time at all one of the residents has decided she wants a piece of DI Brook. I tell you, the women can't get enough of him.

The whole 'who is The Reaper' thing is a bit of a confusing, baffling mess, the writing isn't great but even so I think I'll be carrying on with this series, I'm just not sure when exactly

Priest of Lies by Peter McLean

'Tomas's power grows, the nobility better watch their backs, in this dark and gritty epic fantasy series.
People are weak, and the poorer and more oppressed they are, the weaker they become--until they can't take it anymore. And when they rise up...may the gods help their oppressors.
When Tomas Piety returned from the war, he just wanted to rebuild his empire of crime with his gang of Pious Men. But his past as a spy for the Queen's Men drew him back in and brought him more power than he ever imagined.
Now, with half of his city in ashes and the Queen's Men at his back, the webs of political intrigue stretch out from the capital to pull Tomas in. Dannsburg is calling.
In Dannsburg the nobility fight with words, not blades, but the results are every bit as bloody. In this pit of beasts, Tomas must decide once and for all whether he is truly the people's champion...or just a priest of lies.'

This sequel to Priest of Bones starts well...

That had been my wedding gift from Ailsa and the Queen's Men. From this woman I called my wife...'

and to be fair it just gets better from there. Tomas Piety and his Pious Men are a motley bunch and, as you would expect, are soon knee deep in intrigue.

What I really enjoyed about this book, and the series as a whole is that this is very much The Godfather set in a fantasy world. Piety is very much The Don Corleoni of Ellinsburg (small side point: Ellinsburg feels a lot like Edinburgh) and although he and his gang come across as villains at times it's easy to see that they do what they do for the right reasons. I've seen it said elsewhere that this is Peaky Blinders with swords and I couldn't put it better myself. Invest in this series of you haven't already, you won't be sorry 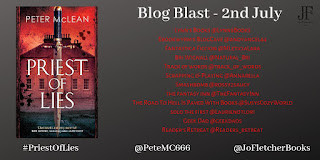 Posted by Ebookwyrm at 09:54 No comments: