Interview with Stewart Hotston plus Cover Reveal and Blurb


In The BlogCave today I am happy to have an interview with Stewart Hotston and a cover reveal and blurb for his new book, due out in a few months time.

So, getting things started, Welcome to The BlogCave Stewart...

This is the bit I hate! First and foremost I'm a dad. I work for a bank mucking around with what some people have euphemistically called financial weapons of mass destruction. I'm also a physicist by training - my PhD involved programming super computers and reading papers on quantum mechanics and molecular dynamics. When I'm not writing or working I'm also a swordsman - focusing on 16 and 17th century rapier and dagger and sidesword and buckler, although I love tomahawks and pole arms as well! If you were to catch me when no one was looking I'd probably be eating chocolate and watching a movie with my feet on the table.

2. Tell us a bit about the book

At heart, Tangle's Game is a thriller set just a little bit beyond where we are today. It's about a very successful business woman who gets back to the UK after a business trip only to be stopped at immigration and denied entry. It turns out an ex-boyfriend of hers (who she's not seen for a decade and would probably set on fire if they did meet again) is a person of interest to national security and they think she's involved. She's eventually set free but when she gets home discovers a package from him on her doorstep. The story follows what happens when she opens that package. The novel explores themes of freedom, social media, democracy and how ordinary people like you and me can change the world through small decisions.

3. Do you have a set writing regime?

Absolutely. I have a fairly long commute each day and it's my golden time for writing. It's not too long that I run out of steam and I get to sit down twice a day without interruption and write for about half an hour. I couldn't recommend it more to people looking for space to write.

I want the right music. I want to have uninterrupted time. The former is more important than the latter although I find interruptions lead to rubbish progress. I've written more stories to #65daysofstatic than I care to admit. Recently I've been all over Nothing But Thieves and X Ambassadors. I find having the right music elevates my imagination and also helps me get into that flow when the rest of the world just fades away.
And I don't write too much in one go - for me I find the quality diminishes, becomes bland and boring and if I think that and I'm the writer I can't possibly put that in front of other people. So I stick to about 1,500 words a day even if I feel I've got more in the tank.

5. What was the inspiration for this novel?

Working in finance I've been following the evolution of blockchain currencies like Bitcoin since about 2012. Late in 2017/early 2018 there was a bubble in the value of most of them that has since burst. I was really interested in exploring what these and other new technologies might be used for socially. I am horrified by the idea of social credit scores (already a feature of life in China) and who gets to decide what's good and bad. I am equally horrified at how machine learning appears to be learning all our prevalent racist and sexist prejudices but codifying them and putting them beyond challenge - not out of some secret conspiracy but because they're reflecting back to us, unvarnished, how our societies really work. I wanted to explore the
experience of someone who totally benefits from everything good these systems can bring when it all goes horribly wrong.

6. What would be your choice of genre if you were not writing in this one?

7. Where is your favourite place to write?

8. Who does your covers and do you have any input into the design?
The amazing Sam Gretton did the cover. I had some input but really only on themes and I especially wanted the colour gold to be a prominent part because...well the working title had the word Byzantine in it and when I was playing around with a pinterest the really outstanding note for Byzantium was gold! So I'm really glad we managed to get that in.

9. Who would be your ideal three dinner guests, alive or dead (and what would you serve)?

Dietrich Bonhoeffer - the priest who moved away from pacifism to be involved in the plot to assassinate Hitler.

My late Anglo-Indian grandmother, Barbara. She was a proper genius and a force of nature and I'd love to have these three around the table to put the world to rights.
We would obviously eat some white asparagus for starter for Bonhoeffer followed by curried king prawns cooked by my nan.

Thank you for that Stewart, very interesting. And now...on to the Cover Reveal and the Blurb 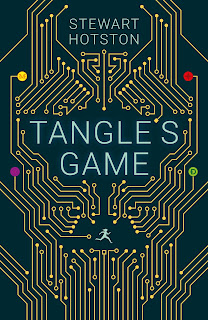 Yesterday, Amanda Back’s life was flawless: the perfect
social credit score, the perfect job, the perfect home.
Today, Amanda is a target, an enemy of the system
holding information dangerous enough to disrupt the
world’s all-consuming tech – a fugitive on the run.
But in a world where an un-hackable blockchain links
everyone and everything, there is nowhere to run…

About the Author
Stewart Hotston lives in Reading, UK. He loves pretty
much all fiction. Stewart spends his days working in
high finance and, in a completely unrelated subject,
he read for a PhD in Theoretical Physics, taking
great interest in philosophy, theology and economics
(some of those even involving additional academic
qualifications). He has previously been published
across more than a dozen different publishers of short
stories and his first two novels were published by
Alternative Realities. When Stewart is not writing or
working he’s also a world ranked swordsman in both
Rapier and Sidesword - for his troubles, he’s a senior
instructor at The School of the Sword.

Many thanks to Remy Njambi for giving me this opportunity
Posted by Ebookwyrm at 01:34