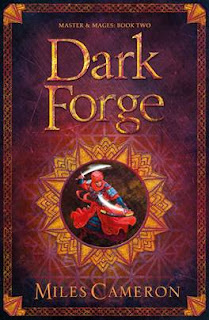 Welcome to Day 4 of the Blog Tour for Miles Cameron's Dark Forge. Also, it's release day here in the UK so congrats Miles.

'Some may find their bravery as worriors, or as captains, but others tend to the fallen or feed the living. Yet on the magic-drenched battlefield, information is the lifeblood of victory, and Aranthur is about to discover that carrying messages, scouting the enemy, keeping his nerve, and passing on orders is more dangerous, and more essential, than an inexperienced soldier could imagine . . . especially when everything starts to go wrong.

Battle has been joined - on the field, in the magical sphere, and in the ever-shifting political arena . . .'

The first book in this series, Cold Iron, was my Book of the Year for 2018 so Dark Forge has a big job on following that. Thankfully it's mission accomplished.

Whereas Cold Iron was largely based around hero Aranthur's training with Dark Forge he is forced to grow more as the story is a lot more battle/warfare based.

As a general rule I prefer my fantasy fiction focusing on Epic Quests but Cameron managed to make me connect with this book, mainly because Aranthur doesn't start out as a super warrior type, he's just a messenger. That's not putting down on his position - the messenger is vital to the battle as much as all the soldiers. Seeing him dashing between the different sections of the army, the reactions of the message recipients, the different reactions to orders... yes, this was certainly a different angle to story telling that I definitely enjoyed.

Add to all this the fact that (in my opinion) Cameron is one of the best battle scene writers around at the moment and you have a cracking second volume. 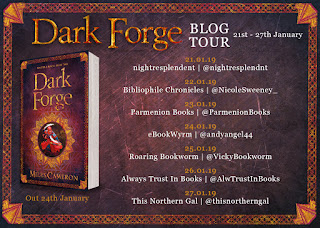