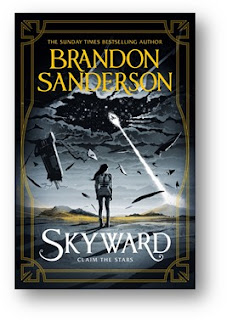 All Spensa wants is to be a pilot like her dad was and take the fight to the alien Krell. The problem is that her dad was killed when he seemingly deserted his squad mid battle and no-one is going to let that act of cowardice be forgotten.

But just when it seems all Spensa's dreams are shattered the Krell massively increase their attack numbers and the people of Desolation will need every available body that can get to try and survive. It looks like Spensa is going to flight school after all.

Skyward is a rather hard book to place for readership. In a way, with it's young protagonist the easy thing would be to call it YA but that would probably mean a lot of older readers may miss out (although, in my opinion, YA is a misleading label as there are a hell of a lot of cracking books in that genre that I enjoy - and at 50+ years old I'm a long way from being YA). The story itself is as good as I expected from Sanderson, he does characters really well and Spensa is just that - a really well drawn heroine, flaws and all.

Where this book comes into it's own though is when the pilots take to the air. These scenes are both epic and breathtaking with the pages whizzing by.

The animosity from many towards Spensa is strongly felt but there's also a sense of kinship and acceptance from some which balances things nicely.

Hopefully Sanderson will have more of this story to tell and when he does I'll be at the front of the queue to grab a copy and see what the future holds.

Many thanks to Stevie Finnegan and Gollancz for inviting me to take part in this Blog Tour and please, if you get the time, have a look at the reviews from these other lovely bloggers who have taken part 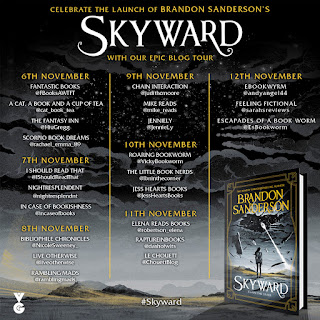