Carnifex: Legend of The Nameless Dwarf book 1by D. P. Prior - A Review 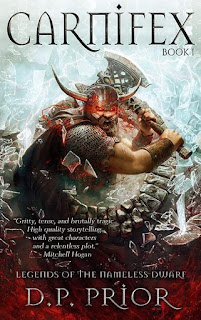 First things first, let me get this out there...........I don't particularly like fantasy sagas that focus on Dwarves. Their society bores me a little. Well, that was the case until I decided to have a look at Carnifex.

As this is the first in the Legends Of The Nameless Dwarf series it is, in effect, an origin story.  There is a good deal of set up and foreshadowing but that doesn't get in the way of a bloody good yarn.

Our hero is Carnifex, a member of the Ravine Guards. He is a likeable guy, a bit gruff maybe but I guess that's a typical Dwarf. He has a brother who is a scholar and a father who was told, in a kind of prophecy, that his sons were special (I'm really trying not to drop spoilers here)

The society of the Dwarves is very insular with absolutely nobody allowed to leave The Ravine. If any Dwarf does venture into the outside world they face exile and, more importantly, being stripped of their name (you can see where we are going here can't you) and having it erased from history.

As you would expect from a fantasy 'origin' book  there is a good deal of history but not enough to bog the story down, there are 'artefacts' and monsters (mainly in the form of Golems who provide a real test to our hero.

By the end of the story I thought I had an idea of what the outcome would be but I was wrong footed I guess.

And then we come to the final scene. It's not often I'm left speechless but this was one of those times. WOW!!

I like my fantasy big and sprawling but in this instance I was happy to just spend time with the Dwarves. The city/Dwarven Homeland was believable and well thought out, the society and hierarchy worked and, to be honest, I had a bloody good time with this book.

I'm looking forward to the rest of this series, a lot.

I'm going to give Carnifex 8.5/10 stars just because I'm expecting even better in future volumes.

A very, very good 1st volume
Posted by Ebookwyrm at 00:48 No comments:

The Monsters Inside by Belinda O'Brien - A Review 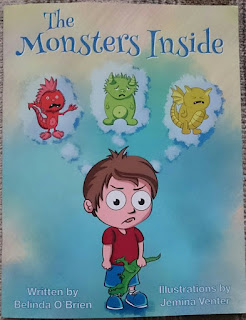 Let's face it, all kids can be prone to temper tantrums when they cannot get their own way or if they don't get the attention they crave. It's all part of growing up.

What we have here is a story about a youngster called Jack who, as the title suggests, has monsters inside. These 'monsters' are the temper tantrums that come to the fore when he gets frustrated.

With some help from his mum Jack learns how to cope with his 'monsters' and keep them inside and making things nicer for everyone.

And that is, I guess, the main purpose behind this quite lovely book. The 'coping mechanism' that Jack learns with his mum is really quite easy to learn and will benefit children and parents both (I tried it for myself and it works).

As well as been a really nicely told story (nice rhyming verse style and quite catchy) this book comes with some really beautiful illustrations by Jemina Venter that capture the approaching storm as Jack's 'monsters' prepare to raise their heads and the return to happy Jack after.

It may sound corny to say every family should have a copy of this book, or at least give it a try, but I honestly believe it.

A lovely and informative tale with beautiful illustrations - 5/5 stars
Posted by Ebookwyrm at 07:59 1 comment:

Eye For An Eye by Graham Masterton - A Review


I have been a fan of Graham Masterton's horror fiction for 30+ years but this dip into his crime fiction left me feeling a tad short changed.A priest is found dead in the garden of an old religious lady who has been threatened by 'Satan' on several recent occasions. 'Satan' told her, apparently, to sell up and move to somewhere else (although the police seemed to not notice when she told them that). The search for the murderer leads to a local tools firm who's land gives the only other point of access to the old lady's garden.I made a point of finishing this as it was a short story but, to be honest, if it had been much longer I'd have probably bailed. The 'who' was pretty obvious from the outset and not exactly challenging.There are several full length novels in this series so I may give them a try at some point but I don't have high hopes for them
Posted by Ebookwyrm at 08:42 No comments: